Valerie Hegarty, Glowing Peaches in a Basket, 2015, watercolor on paper.

Valerie Hegarty, George Washington on a Horse as a Topiary (small), 2016, glazed ceramic.

Burning in Water is pleased to present American Berserk, a solo exhibition of new work by the Brooklyn-based artist Valerie Hegarty. The show features a suite of watercolor paintings and four series of ceramic sculptures. American Berserk is Hegarty's first solo exhibitin in New York City since her acclaimed Alternative Histories at the Brooklyn Museum in 2013.

Cloaked within allusions to American classicism and evocations of the decorative and ornamental traditions, Hegarty’s work consistently interrogates the darker ramifications of the American Experiment, ranging from the environmental impact of expansionism to the conflicted and repressed dimensions of collective memory.

The title of the current exhibition is borrowed from Philip Roth’s Pulitizer-prize-winning novel American Pastoral, in which Roth defines the inverse of the American pastoral ideal—epitomized by the violence, cultural dissolution and societal upheaval of the late 1960s and 1970s—as the “indigenous American Berserk.”

With the concept of the “American Berserk” as a touchstone, Valerie Hegarty began the body of work in the current exhibition with a series of watercolor paintings that she created during a two month residency at the MacDowell Colony in New Hampshire. Viewed as a whole, the suite of watercolors suggests a fevered, hallucinatory vision of American history examined through the prism of its visual artistic traditions. Still life paintings of fruit evoke the works of Raphaelle Peale, although hints of rot allude to the degradation of the bounty of the American landscape. 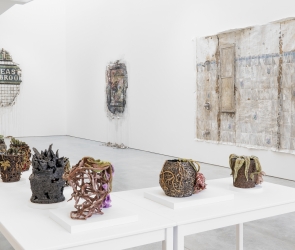 Valerie Hegarty
Back To Top