The gallery is pleased to present an exhibition of new work by Philadelphia-based artist Jesse Krimes: Strange Roots. Encompassing free-standing sculptures, mobiles and installations, Strange Roots is the artist’s second solo show with the gallery. The artworks in Strange Roots embody a curious hybridity of both materials and processes, incorporating digitally-printed plastic substrates, botanicals and other natural materials and handblown glass. Strange Roots will be the inaugural exhibition in our new gallery space at 507 West 27th Street.

Krimes began the investigations that would ultimately result in the artworks in Strange Roots with extensive research into digital image search algorithms - employing Google image search queries to examine how an array of socio-political, historical and culture themes were reflected back visually to the user through the prism of the digital ecosystem. For example, he would probe how internet search tools would register imagery associated with a term such as “decay.” He then traced how specific themes, embodied as a series of digital images, would evolve as he continued to pursue them along a path dictated by the relational infrastructure of the internet.

Employing a sort of digital archaeology as his methodology, Krimes conducted broad experimentation with how his inquiries into complex or fraught subjects would be registered as a seemingly endless, iterative stream of algorithm-mediated imagery. The objective guiding this process was Krimes’ interest in discerning correlations between the organization and dissemination of visual content on the internet and societal values, perceptions and norms. Krimes characterizes the process as “a means to excavate the underlying structures of our digital landscape and its function as a space that reconditions our perceptions of reality.”

Conceptually, Krimes came to consider the bodies of visual information he uncovered as products of vast digital algorithmic networks all “feeding into a Leviathan,” which he defines as “the body politic as reflected through clicks, search results and social values.” In attempting to map the contours of this “Leviathan,” Krimes became acutely interested in not only the prototypical imagery that tended to recur but also its inverse — imagery that was expected but failed to appear. Probing for fault lines, he would utilize compounded search topics, such as appending the adjectives “moral” or “societal” to his searches for images related to “decay” and “America.”

The works in Strange Roots represent continuing investigations into Krimes’ abiding interests as an artist, including how contemporary media representations influence our perceptions of individual and collective identities and the ways in which such perceptions shape or reinforce mechanisms of power and control within society and nominal conceptions of freedom and justice - processes that he broadly categorizes as “societal scaffolding.” For Krimes, such concerns are simultaneously broadly philosophical and intensely personal, with their origins reaching back to the six years he spent incarcerated. 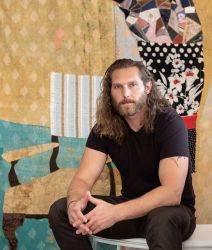