The focus of the paintings in the exhibit is a lone female figure rendered in a range of settings, who alternately appears in varying affective states: aggressive, threatened, forlorn, physically daring. Her environment is a curious amalgamation in which particular elements are foregrounded - a still pool, a vertiginous rock face, an expansive beach - while other details are shorn away in favor of an enveloping, enigmatic darkness.

Taken from the poem Sister was the wolf by Aracelis Girmay, the title of the exhibition suggests a milieu in which external, natural settings and the inner topography of the psyche are commingled or possibly enmeshed. In this context, the protagonist intermittently takes on various classical personae such as the shield-maiden or valkyrie Brünnhilde; Judith from the Book of Judith; or the Greek goddess Artemis. With her polyvalent identities, the protagonist is perhaps most akin to the protean character Artemis, who in early Greek mythology was a “lover of woods and wild chase over the mountain” and served as “the protectress of dewy youth,” but whose identity later split into a trinity including Hecate, the “Goddess of the Dark of the Moon.” Hecate’s nocturnal dominion over over the earth was dependent on the blackness of moonless nights. She was “Goddess of the world above,” but only when it was completely “wrapped in darkness.” 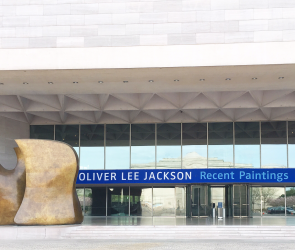